Yes we can / But they don’t want to

The grassroots movement of people affected by the mortgage crisis known as Plataforma de Afectados por la Hipoteca (PAH) had just submitted a citizens’ initiative (iniciativa legislativa popular, ILP) to Parliament, which proposed three measures to guarantee the right to housing in Spain: social rental housing, the acceptance of property in lieu of payment or foreclosure, applied retroactively, and the immediate cancellation of all evictions. Surprisingly, the hardest thing about submitting a citizens’ initiative to Parliament in Spain isn’t the fact that the law requires you to collect 500,000 signatures (the PAH did almost a million better). The really difficult thing was to get the Ministers of Parliament to vote green and approve it in Parliament. The only way that the PAH could make this happen is by making the MPs understand the drastic consequences that voting red can bring about. With this in mind, the PAH repeatedly invited MPs to their assemblies so that they could personally explain the situation of people affected by the Subprime mortgage crisis. Unfortunately, not a single MP turned up. The PAH was running out of ideas and considering giving up when somebody suddenly remembered the Argentinean practice of escraches. 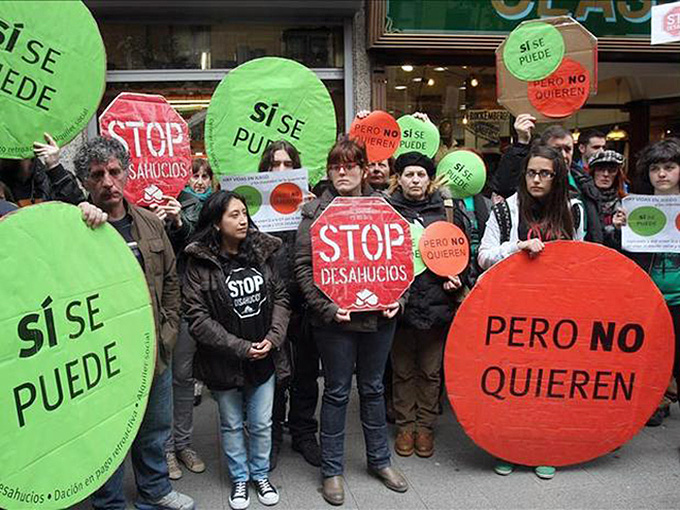 In Argentina, “escrache” is the name given to a type of non-violent demonstration in which a group of people go to the homes or workplaces of those they want to publicly condemn or denounce. The PAH thought it would be a good idea to adopt this practice and adapt it to our own context, to make MPs aware of the emergency situation that thousands of people currently find themselves in. You know how it is: “If Mohammed won’t go to the mountain…” But the leap from the “Stop Evictions” campaign to escraches was not without dangers. The PAH had to make sure it transmitted the meaning and intentions of this new strategy, in order to avoid being misinterpreted. And that’s where we stepped in.

The housing problem has always been a priority for Enmedio. Quite a few years ago, before the property bubble burst, some of us were heavily involved in V de Vivienda, a grassroots social movement that fought for the right to decent housing. Back then we designed the campaign You will never have a house in your fucking life, which made a big impact all over Spain. More recently, we’ve also carried out numerous photographic actions against evictions, by this time in collaboration with the PAH. So when we got a call from them asking us to help design the escraches campaign, we were more than happy to accept. 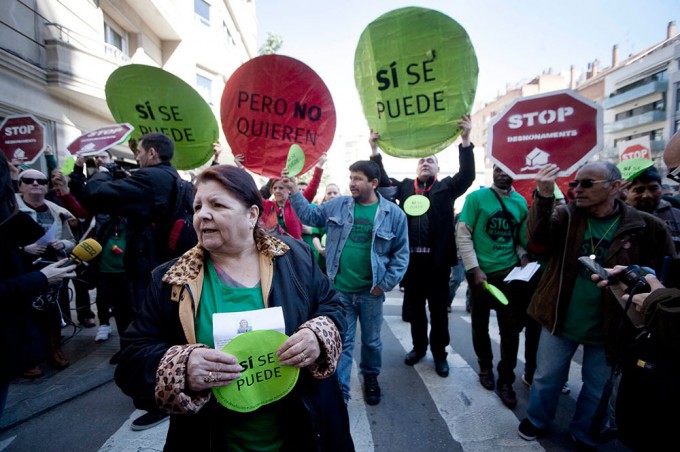 It isn’t easy to work with escraches – it means facing a series of difficult challenges… the kind we love! Firstly, it was important to make it clear that the PAH escraches were not about pointing the finger at anybody. Their aim is to inform and communicate the enormous social support behind their proposals. This meant that we had to devise a visual strategy that could generate a pleasant, non-confrontational environment. A series of images that could immediately transmit the hope encapsulated in the measures included in the citizens’ initiative. Secondly, it meant working with a social movement (the PAH) that has built up a whole visual universe over the past few years (the colour green, the slogan “yes we can”, etc), which is now deeply entrenched in the collective imaginary. As such, we could not ignore or turn our backs on it. And lastly, the campaign was going to be Spain-wide, so we had to come up with something lightweight and easy to reproduce on a big scale. 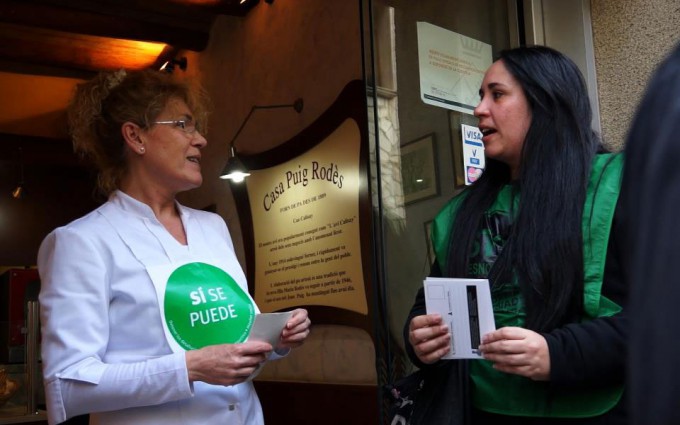 If you live in Spain, you will already know what the outcome was because you’re seeing it every day in the media, social networks and on the streets: two cardboard circles, each one-metre in diameter, one green and the other red. The words printed on the green one say “Yes we can”, and the red one says “But they don’t want to”. As you can see, rather than trying to invent something knew, we decided to do just the opposite: to reinforce the existing graphic identity. This is a common practice in our work, because we believe that’s where creativity lies – in the infinite possible combinations of things that already exist. The circles are made of cardboard because it was the cheapest material we could find. This is another of our creative prerequisites: it should be easy for anybody to reappropriate the things we do. That’s also why we chose to work with circles – any dummy can make an “o” and, on top of that, the shape is very similar to the buttons that the MPs press when they vote. Green circles in favour, red circles against – that’s how the votes are shown on the screen at Parliament. 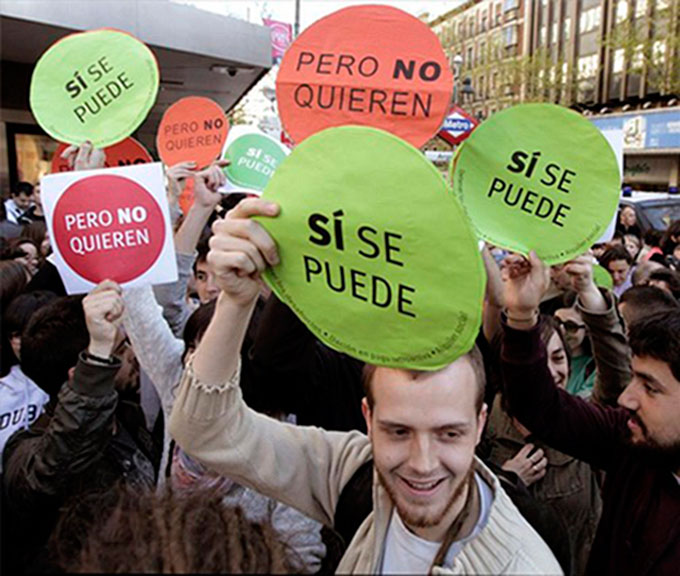 At the same time, we believe in the saying that if it aint broke, don’t fix it. So we’ve kept the successful PAH slogan “Si se puede” (Yes we can) exactly as it was. The only thing we did was add “Pero no quieren” (But they don’t want to). We thought that was a perfect representation of the conflict that the PAH is now facing: they have been fighting evictions for over four years, and now a citizens’ initiative that could change things for the better is about to be voted in Parliament: there are solutions to the housing problem, but a small group of politicians have the power to block them. We rounded off the campaign with some green stickers with the “Yes we can” slogan printed on them, which explain the basic measures proposed in the citizens’ initiative. The idea behind these stickers is that stores and businesses can paste them on their shop windows to inform people and express their support for the PAH. In order to spread these materials as effectively as possible, we devised the Escrache Kit that can be downloaded from the PAH website. It includes everything you need to make the circles at home following a set of simple instructions.

Two recurring phrases, two simple shapes, two basic colours. There’s nothing there that you can’t do. Yes we can! 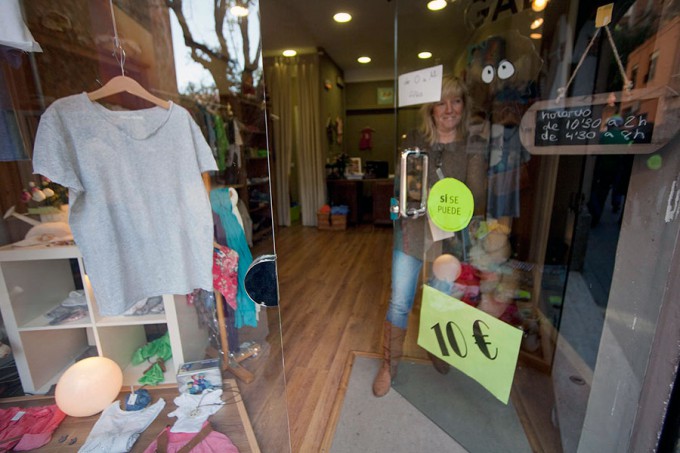 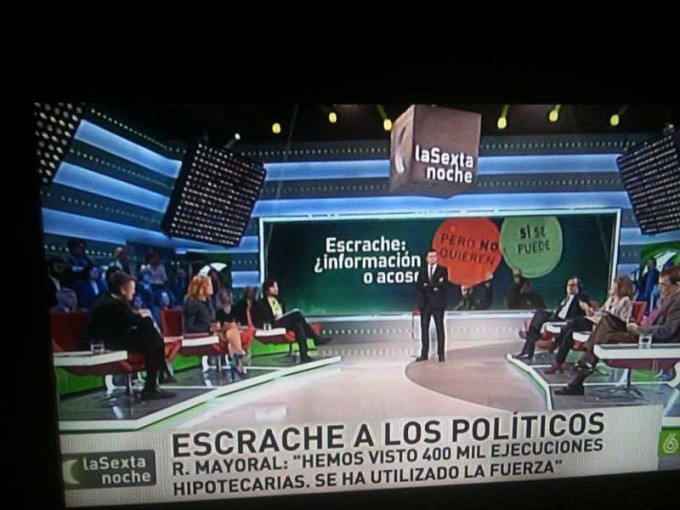 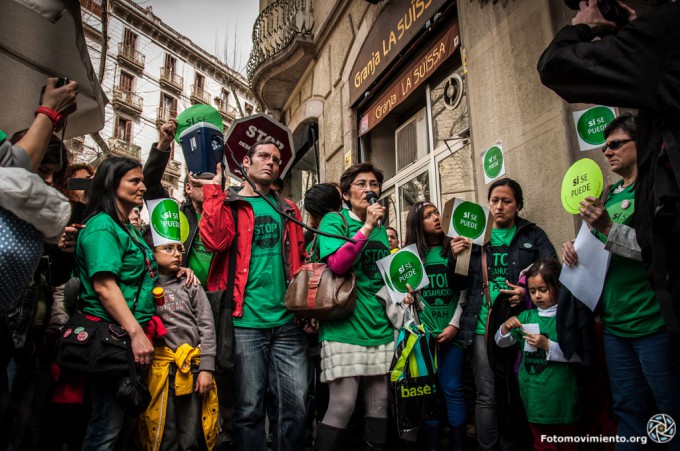