In this short piece, Leonidas Martín (of Colectivo Enmedio) talks about the paradoxically subliminal yet strong social control imposed by state-directed urban design and re-design, the possibly surprising causes and effects of that control, and some heartfelt speculation on art’s role in recovering the nature and purpose of our cities.

Since the day it first opened, the windows of my neighborhood gym have been a gathering point for neighbors. They’re right at street level, and they’re big. Lots of us had sat on their deep windowsills for many years, most of all the Pakistanis who live in the surrounding area. Note that I said, “had sat”, because ever since Barcelona’s City Hall installed some giant metal plates, no one sits there anymore. The gatherings and chit-chats are over. “Keep it moving!”

Saying “metal plates” might make you think of something like those iron gates which restrict access to someplace, or the spools of barbed wire you often see along the borders. They’re nothing like that. The metal plates they’ve installed at my gym are lovely. They’re designed by a young architect, one of the many young architects that work for City Hall, and they’re perfectly integrated with the structure of the building. The window glass, the ledges and the plates complement each other like parts of a Franz Joseph Haydn symphony. In fact, I’m sure that if anyone passed by there today – anyone who didn’t already know what these windows had been, and what they were used for – they wouldn’t notice anything strange. And that’s what’s so interesting.

It’s a given that movement within city spaces has never been free; architecture and urban design have always directed it. But unlike the fences, bars, and walls that once were used to restrict and channel our mobility, this contemporary urban furniture is all but invisible. Before, regulating the behavior of bodies in space and directing what to do and how to do it required very visible elements. Today, however, it seems that this kind of indoctrination calls for something altogether different – going unnoticed, or only minimally. And with hardly a change to the landscape, it serves its repressive purpose – or does it one better.

It isn’t always like this; there are still places where these urban elements controlling bodies in space are crystal clear. You only need to have a look at the southern border of Europe to get the idea. In Ceuta, for example, the walls and the barbed wire aren’t hidden under any pretense whatsoever; in fact, it’s just the opposite. In these places, the urban elements are clearly visible. They have to be. Their effectiveness depends in large part upon their visibility. An undocumented immigrant who wants to enter Europe must plainly see the material obstacles he’ll run up against, the things blocking his entrance. Presumably, one would think twice after seeing things like that.

But this piece of mine isn’t set in any of those locations. What I’m talking about here is other places, where the immigrants who already crossed those borders end up. I’m referring to those cities where they come to seek their fortune: particularly, those cities which profit from advertising themselves almost like commercial brands. Cities like Barcelona, Paris or London. In these places, the devices dictating behavior go virtually unnoticed. They’re integrated into the visual matrix of the city itself, hardly perceptible, serving to uphold the aesthetic values and morals associated with that city, while hiding their primary function – directing the mobility of the people.

The plates installed outside the windows of my gym are far from the only example of this kind of urban installation designed to prevent unwanted situations and social behaviors.  The city-brands are full of these elements; low hedges and bushes, strategically located to prevent people from making themselves at home in public places; magnificent wrought iron fences blocking access to restricted areas; exquisite spikes preventing people from laying down where they shouldn’t; geometric forms in noble materials placed in corners to dissuade people from getting cozy where they oughtn’t…endless urban designs which, as in the E.A. Poe story “The Purloined Letter”, are right in front of everyone, yet pass unnoticed. We come across these things a thousand times, but we never see them, or, at least, we never see their true, hidden purpose.

At first glance, these elements could seem irrelevant, just little urban bits not worth considering. But as I see it, these fragments represent – although slyly – the spirit of the economic and political model which created them: the spirit of the market. A spirit which sets everything in motion (people, cities, countries, works of art…) under the criteria of the one and only law: extract the most profit possible from any human activity. This spirit is everywhere; it affects us all and all that surrounds us. The immigrants themselves, as mentioned earlier, were driven here by this spirit. It’s what set them in motion, the power that has pushed them over the walls, dodging barbed wire. “Motion” here doesn’t imply freedom, far from it. All movement prompted by the spirit of the market must always be conducted and occur under the law it imposes. Otherwise, this mobility could deviate, resulting in a non-consumer-economy objective – and that’s a risk the market can’t take. In this sense, the metal plates at my gym, or other similar urban elements, are the grease which helps to run the indoctrination imposed by the spirit of the market.

The behavior of the citizens, as with the identity of a city, is not something to be taken for granted. Instead, it’s one’s own actions, and the changes these acts make to the social fabric, are what create behavior. These actions and behaviors could be, a priori, infinite. To limit them, to make them respond to a certain spirit, takes a lot of creativity. Right here is where the role of an artist comes into play – or has this not always been the artist’s task, to bring a touch of common sense to something that has neither pre-existing logic nor order (as Oscar Wilde said, “…to teach Nature her proper place”)? It comes as no surprise, then, that it’s the artists, the architects, and the designers who are in charge of translating into form (urban furniture, in this case) the one commercial law and its objectives. They do it because it’s what they know how to do, it’s how they make their money. But they also do it because they’re more concerned with form, with those aspects that lie at the heart of art itself, than with the end-uses derived from their work. And they do it for one more reason.

In the world we live in, each of us goes it alone in society. No intermediaries. A stranger among strangers. This emboldens a “me” full of pride, ready to believe he’s almighty. But it also encourages a “me” ready to fall at the feet of any effigy that crosses his path. A “me” ready to take on the world, but beaten by fear and loneliness. So this young architect designs the metal plates which later get installed by City Hall in the windows of my gym, because he feels lost in some incomprehensible hieroglyphs. This young architect looks at life as characters in Kafka’s novels do. He knows not who decides things, nor to whom he may turn in search of justice or help. For him, to live is to be dragged along by a mysterious force whose sheer power and great size reveals his own utter helplessness.  This is the starting point from where our young architect designs the metal plates which serve to prevent immigrants from gathering in the street.

Each time I go for a swim at the gym, I wonder – what would it be like, an art that could break this damned aesthetic statute that prevents gathering? An art open to a dynamic concept of life, where our surroundings are created in direct relation to constantly changing behaviors? What would it be like, an art that stood up to established forms of behavior, and able to adapt to new ways of life, ones we’ve been seeking for a long time? And what about a form of urban design which, instead of concealing repression, organized our shared world? Because this, and nothing else, is a city: the organization of our shared world. 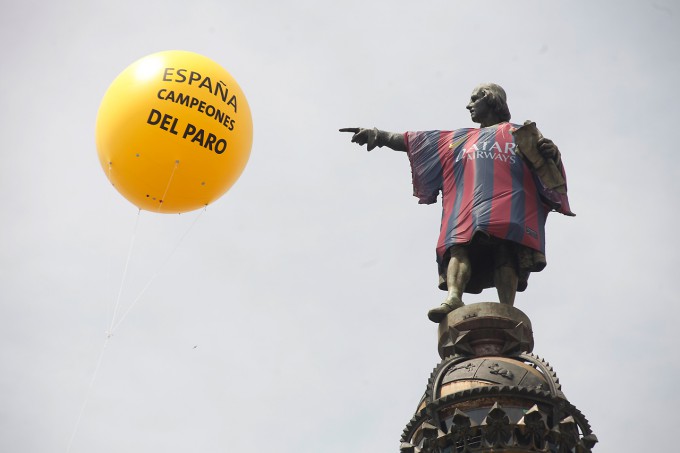 Party at the Unemployment Office

The crisis is here, let the party begin!
April 30, 2009. At first the crisis was just a state of being, a kind of social sadness that paralyzed everything. To break this atmosphere we couldn’t think of anything better than to throw a party. The first thing you need for a party is a good location, so we set out to find a place where social sadness and fear were extremely present. It didn’t take us long to find one: an unemployment office. We turned up there one morning with our sound system. It was amazing. Less than five minutes of dancing and messing around were enough to put a smile on those long faces.
The video of the party became very famous, far more so than we ever imagined. Today it has over a million hits and has been an inspiration for many other celebrations which, since then, have been held at employment offices throughout the country.